On September 26th 2012, Jesus joined Cindy and I for his first game of Cult Leader. We had brought him in on the project a while ago and it was good that we did. The ideas that he brought to the table that day were the inspiration for many significant improvements. 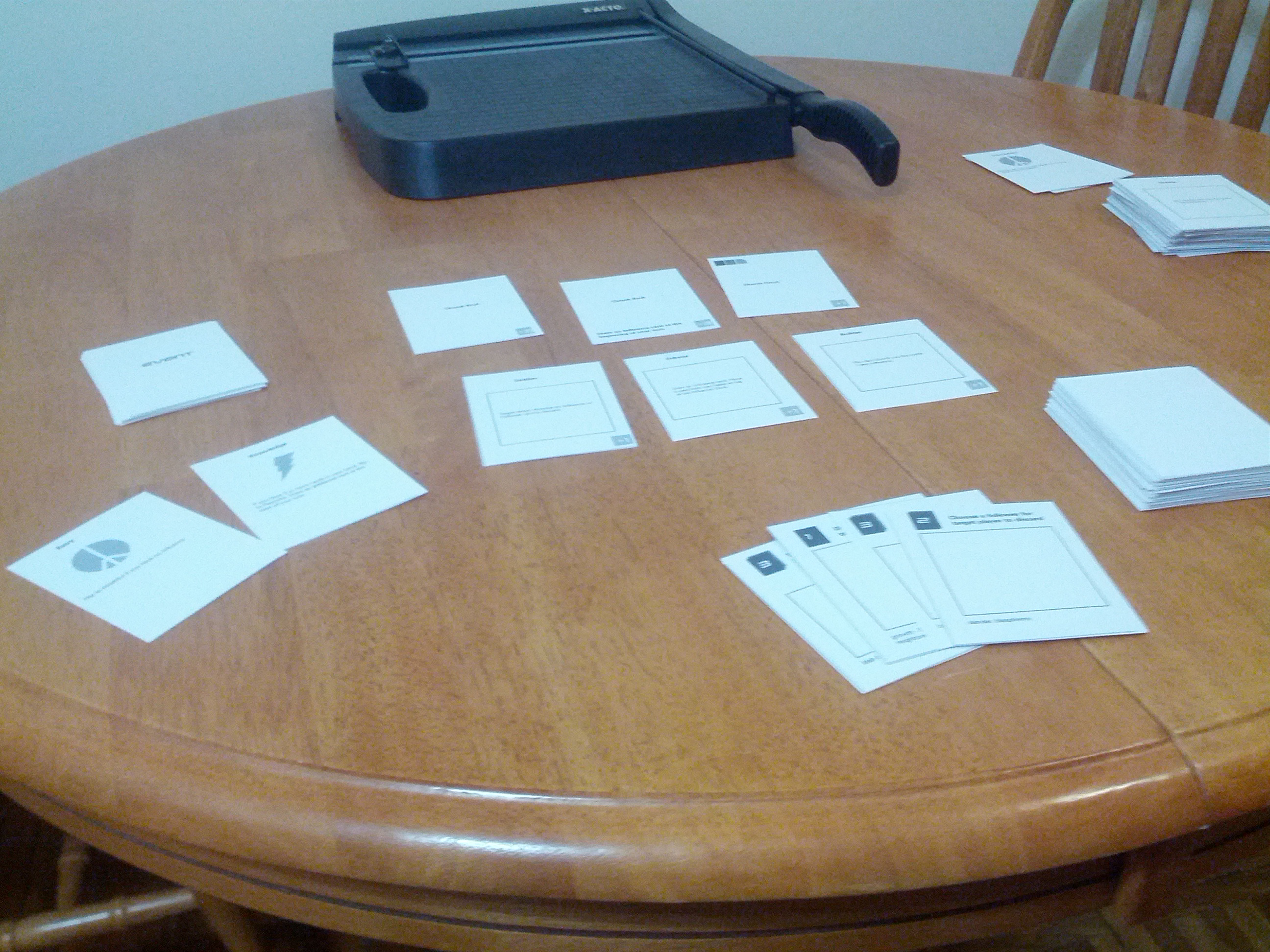 Unfortunately, we don’t have any pictures from that day. I still have the old prototype though, so I laid them out and snapped some pics. This version of the game had Influence cards, which act as currency and also give you special actions that you can pay for. It had Event cards, which change play for the round that they are flipped. The Shrines and Followers were always available to be purchased with Influence. Filling up a Shrine with Followers would grant special bonuses. And finally God cards, which were dealt out to players at the start of the game and granted unique benefits. Also, note the paper cutter that I purchased online immediately after I cut out 300 cards for our next prototype. 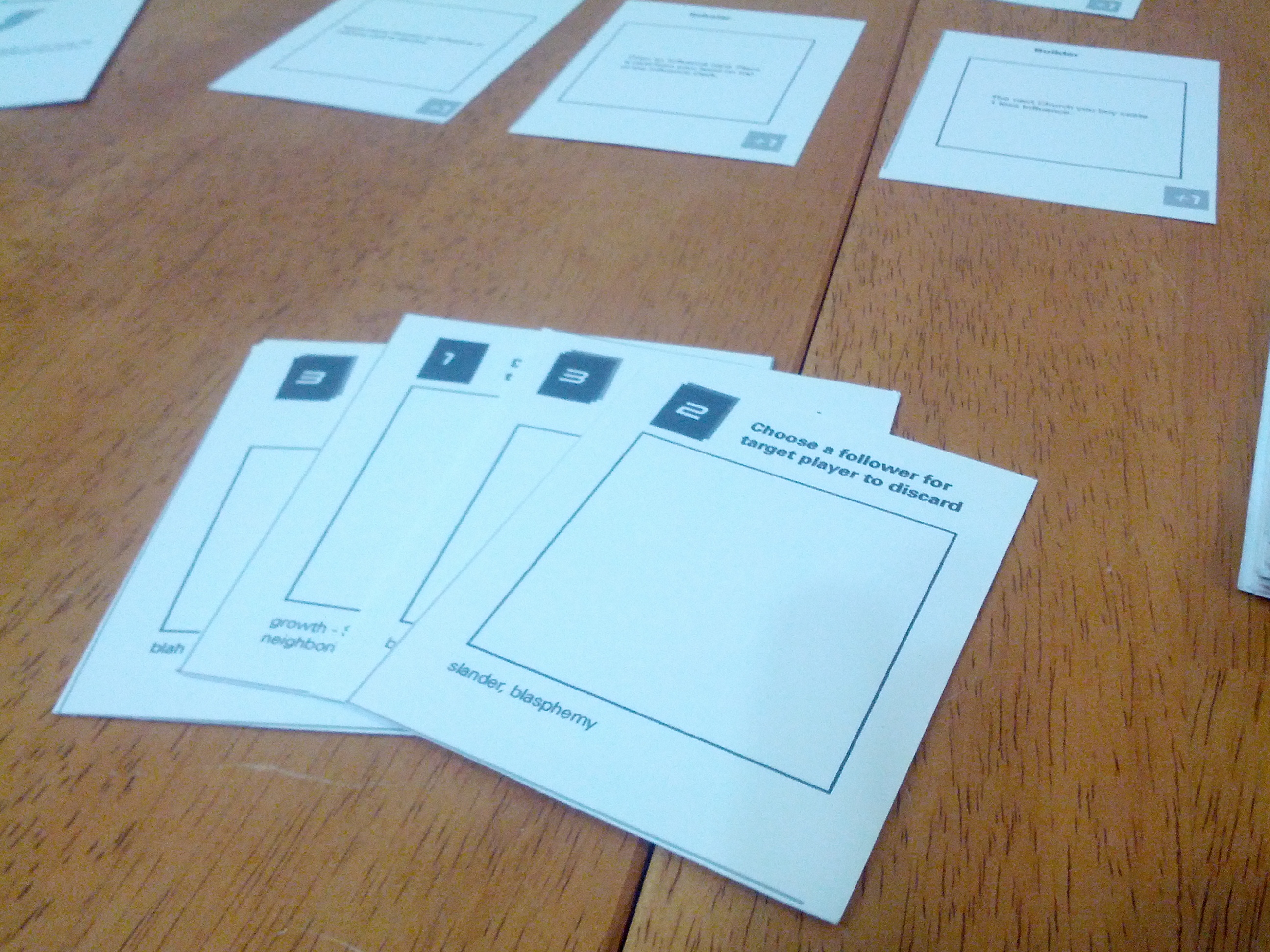 This was the first prototype we made where the cards you drew were also the currency you used to purchase things. The currency in our game is called Influence, and you can gain Influence in a variety of ways. Influence cards also give the player access to special actions that they can execute by playing the card and spending any required Influence. In earlier versions, the player was granted a certain amount of money to use during their turn and they had to mentally keep track of it. And in versions before that, we were keeping track of money with tokens.

Having the Influence cards be the currency and a way to give additional options to the player does a few things for us. It allows us to stay true to our design goal of using only cards. The player can easily keep track of how much they have to spend. It also introduces some interesting decision making, since the act of buying something requires the player to discards some of their options.

After this playtest, we ended up splitting the Influence cards into Ideas and Relics. Ideas would perform the same function of providing one-time actions to the player. The new Relic cards would be played the same way, but would persist. This split came from a change in our theme.

Before Jesus entered the picture, the setting of the game was to be on another planet where strange and varied religions were only just starting to form. Jesus had the idea to set the story in a post-apocalyptic Earth, far into the future. And the thing that sold me on this setting was his idea for Relics. The people of this distant future are far more technologically primitive and have little knowledge of what came before. However, they find these strange Relics and take them as sacred artifacts and ritualistic devices. Bringing these into the game gave the player some more interesting choices and gave us a great way to inject a lot of flavor into the game. 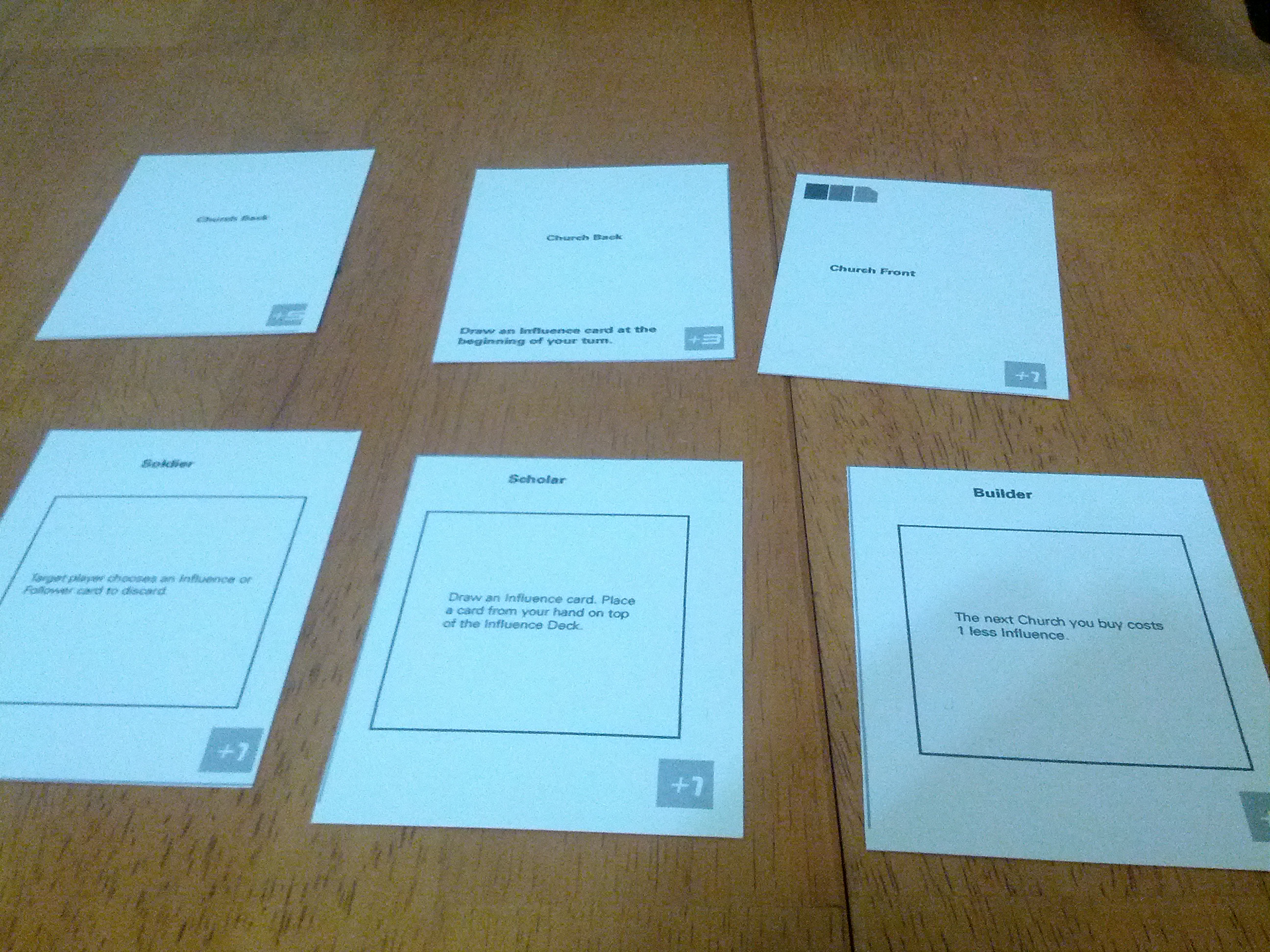 The basic mechanics for Followers and Shrines has remained largely the same in the past few versions. Both can be purchased from a common area by spending Influence. Shrines provide you with benefits and/or Power (victory points) once the Shrine meets or exceeds a specified attendance. Followers must become a member of a Shrine when purchased. Followers can also become Missionaries by removing them from the Shrine. If you do so, you gain a benefit unique to that Follower type. After this playtest, we added a few more Follower types and tweaked the benefits of all the Shrines and Followers. 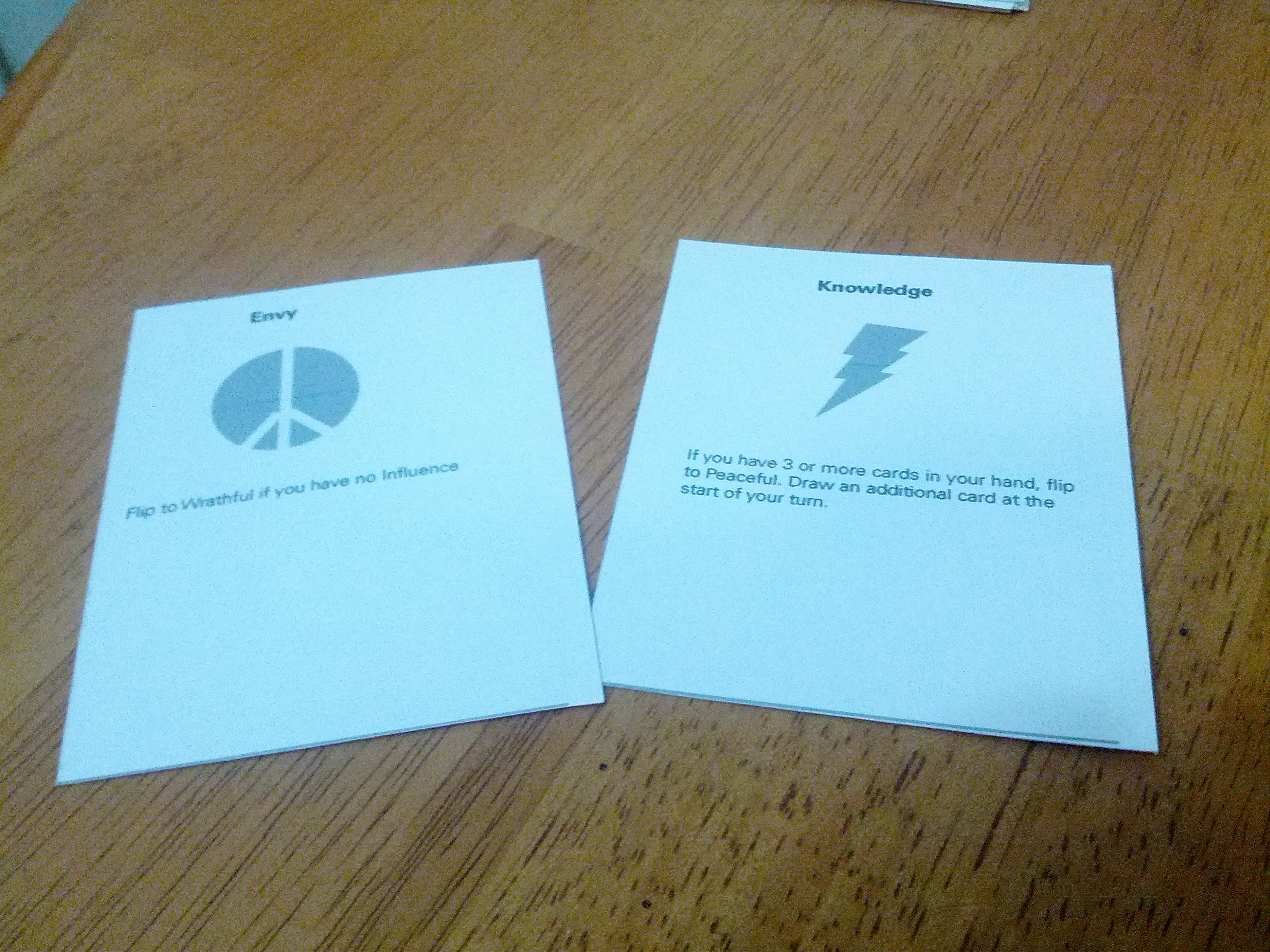 The idea behind God cards was to give each player a unique benefit, so that they would try to modify their play to take advantage of this benefit. But since this game was supposed to eschew supernatural elements, the Gods were to be imaginary avatars of the religions. We were having a really hard time getting this point across in an elegant manner and ultimately decided to get rid of the God cards. However, we liked the gameplay elements they provided and replaced them with the new Culture cards. This gives the player an interesting window into the game world, while still providing the same mechanical elements.

Since this prototype, we have made huge strides with our story and have been working to bring our mechanics in line with the theme. One of the key challenges of game design is getting the story, mechanics, and aesthetics all to line up and support one another. When you get it right it makes for a much more immersive and enjoyable experience. The theme and mechanics of our game are now doing much better at reinforcing each other, but I think we can do even better. How well the theme and mechanics are fitting together will continue to be one of the main questions I try to answer when playtesting.