I’ve been taking the game to a few game designer playtesting meetups. It’s been like walking into a hidden world full of creative and passionate people. Setting our game in front of people who have actually published games is honestly fairly intimidating. There was no need for that though. Everyone I’ve meet has been welcoming, helpful, and honest with their feedback.

I’ve got loads of notes and its going to be quite a challenge to figure out how to solve the problems the playtesters have raised. I’m not going to get into every point in this post, but I did want to talk about a recent addition that came about as a result of some of this feedback. I made a small mention of it in our last post, but now I’m going to tell you how we incorporated the change.

In the game, players draw their hand at the end of their turn. We did this because we felt that it gave players time to formulate a strategy for their next turn, thus speeding up the game. A consequence of this was that discarding was very frustrating, with the worst case being that you could lose all your cards an have nothing to do during your next turn.

We decided to essentially eliminating discard and replacing it with the “discredit” mechanic. Basically players would have a new value to maintain called Credibility, which could be anywhere from 0 to 5. Each Credibility you had at the end of the game would increase your Power (victory points) by 1. Effects could lower or raise a players Credibility and players could also raise their Credibility during their turn by paying Influence. We created new cards that would punish players for having a low Credibility, which would encourage players to spend Influence to keep it up.

The end result is a delayed discard mechanic. You can lower a players Credibility, which they will need to raise later by spending Influence (discarding cards). The main difference is that the player gets to decide when to lose the cards.

I’ve tested the game a few times now with this new mechanics, and so far so good. It seems to handle the problem it was meant to solve and the players seem to actually enjoy it. I also think that its a huge thematic improvement. It’s doing things for us that we had been trying to capture from the start.

Now that’s all well and good, but there’s one more thing we needed to deal with in order to meet our design goals. We had to figure out a way to keep track of Credibility without introducing any outside tokens or trackers. To do this we took a note from the game Bang! and put a value tracker on the backs of Culture cards. Below is a crude representation to give you an idea of what I mean. 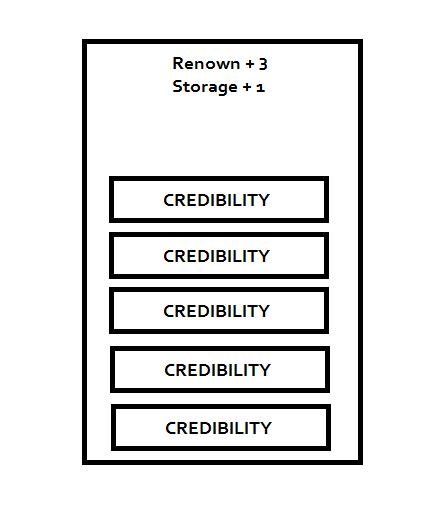 A player can use their actual Culture card and place if partially covering the back of an unused Culture card. By sliding their Culture card up and down, they can indicate what their current Credibility is. We also put the starting Storage and Renown at the top, so that players won’t have to worry about remembering that.

I’m really happy with how this change is working out so far. I’m looking forward to bringing a better game to the next playtesting meetup.