It’s the way of the fool  to marginalize any living thing. Even the smallest, most chaotic ones can surprise you with their victory.

The legend said that there was a certain breed of survivors of the Darkness that did not hide from the terror of that time. In fact, they fed from it until their bodies were strong enough to set out and claim what was left of the world. They were small bands living from meager supplies, with stories told of mythic fire-weapons from the world before. To their disappointment they could find no traces of any in their hunts. They decided then that it was time to make their own weapons from what was left with no regard to the quality of the construction. Those that did find strong materials made deadly arms, such as the Red Crescent – a giant, oddly angled disc cut into the shape of the first sign of the moon.

One of the most dangerous threats to the Beasts was a time called the Prophets’ Culling. Many so-called seers of the future proclaimed of some good, but mostly horrible tidings. As a consequence, fear invaded the minds and hearts of the people. The Beasts became the scapegoats for the doom that fell out of the prophets’ mouths.

The iconoclasts from the Hammers of Light, in their mission to break down anything from the blighted past,  smashed icons considered holy to the Beasts. The Water Runners casted out the rugged warriors into the raging seas when they encountered them on the coastline. The Beasts, however, were born from the calamity of an apocalypse – these new attacks were merely a scratch. Their numbers never faltered, and even in the most trying of moments found manners of survival.

In retaliation, the tribes of the Beasts joined together, and their sole prophet made a declaration:

The moon will bring us her strength in the form of a red bloom. We will harvest it, and from it will come the weapons of victory.

At first, many scoffed at the threat, but as the revolutions of the sun progressed and people became more complacent, the Beasts gathered their small army, each holding Red Crescents, and attacked. Shrines were cut down like chaff in wheat fields, icons were turned against their owners, and the Beasts bestowed on their opponents the mercy they had inflicted onto them. The Prophets’ Culling turned into the Bloom of the Beast. The Beasts made semi-permanent camps after that, knowing full well no one would have the nerve to attack them, and  even to this day when one sees the moon turn red, they look off to the horizon hoping that they do not see the crescents coming their way.

You know those things that, once they occur to you, seem glaringly obvious? The issue with the color palette I’ve been using for the design of the Cultus cards is one of those things. The problem is, I fell in love with a palette. It was bright, pretty, cheerful and modern. It looked great on the geometric forms in the game. The glaring problem with this is, of course, that the game takes place in a post-apocalyptic world that is neither bright, cheery nor modern. Duh.

So the card icons got a makeover! I figured it’s the least they deserve, after such a long hectic weekend at Boston FIG. You’ve got to treat yourself!

A liiiiittle bit of texture was also added to all the outlines so they wouldn’t look so straight and perfect. A little hard to detect on such a small size, but I think it’s enough to give it some oomph.

Now time for a relic makeover!

Phil and I brought the cult with us to the Boston Festival of Indie Games on Saturday. There were 18 exhibitors and a few sponsors showing games at the tabletop showcase. The hall was packed within the moment attendees started coming in, and our table was constantly filled with players wanting to take a shot at creating the largest cult.

Phil and I used this as our pitch:

The theme of the game is that in the far future, the current human society has completely lost track of our society having ever existed. However, they begin to unearth artifacts from our time. Not knowing what these objects are, they proscribe their own meaning to them and ultimately start forming cults around them. Each player is a cult leader, vying to create the most powerful cult.

We must have said our sales pitch more than….what, 50-plus times? It became just another reflex after a while. People liked the theme – they were saying things like “Yeah, in a post-apocalypse I’d start a cult too.”

We had a good variety of people sitting down and playing the game. There were MIT college kids, couples, kids and adults, and more. Our first 4-person game brought in really interested people who got the hang of the game quickly.  One player pulled off a good Revisionism/Overwork combo on Scholar follower cards. What was really interesting was the trend of women playing very aggressive games. They smashed other player’s credibility and stole followers as if they were on a crusade.The really inspiring thing was when a pair of attendees coming back for a second play-through, bringing more friends to play with them.  It was awesome to see the two explain the mechanics of the game without our help.

Cindy got a lot of praise for her work on the relics. She and I designed three flyers – one for the Enduring Confection, Second Skull, and Elixir – that had a snake-oil salesman vibe to it. Attendees were definitely feeling Skull and Confection. Check them out here: 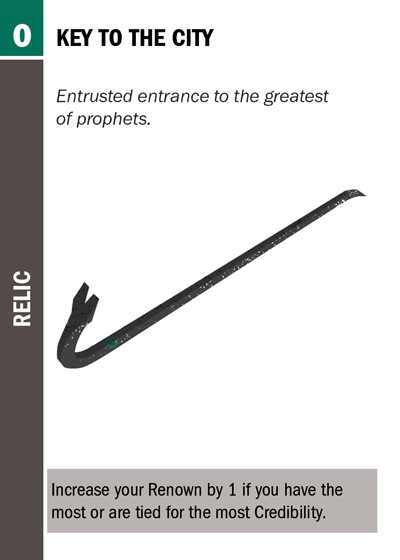 The tongue-in-cheek take on the Key to the City relic made a lot of people laugh. I’m so glad that the idea of relics went well with those who checked out the game. Boston FIG was an amazing way of putting our game through the gamer’s gauntlet, and while Phil and I came out of that day wiped out, the feeling that the game is working made up for all of it.