Hi everyone! I am finally introducing myself – I’m the graphic designer/artist for Cram Games. I’ve been working with Phil since the inception of this project, and I’m really happy to be able to show you what we have so far in terms of art. This is a really exciting project to be illustrating, and I’m beyond psyched to see how it all turns out.

The graphic look and feel of this game has evolved a bit over the course of the past year. We started out wanting a retro 50’s style, which evolved to a sort of neo-art deco, which has now turned into a Mexican day of the dead/renaissance/Neolithic cave painting kind of deal. You know, just something simple… At our last play test, Phil and Jesus discussed modeling our Prophecy cards off of tarot cards. I’m really excited to be working on the prophecy cards, mostly because they’ll involve a sweet icon and some prophetic absolute  jibberish that I get to illustrate.

I started with an icon for the prophecy cards. It needs to be something big and immediately recognizable, to signal to the player that it’s time for them to take an action. For awhile I didn’t want to use the classic ‘all seeing eye’ imagery, but in the end that won out… In a post apocalyptic environment with a reset in human culture, I’d imagine that an eye would be a powerful symbol of future forecasting. To add to that the imagery is already on all American money, so I’d also imagine the future humans would find it and ascribe some sort of meaning to it. I did jazz it up a bit with some directional arrows though. The symbol in the bottom right won out.

Next I worked on incorporating the symbol into a card layout, just to get a feel for what might be surrounding it. I’d like to use simple symbols to represent the prophecy written out on the card. It’s not imperative to gameplay, but it’s fun and reinforces the idea that most of these super vague prophecies are…well, super vague and ascribable to most major events if you try hard enough. To pull from renaissance art/vintage tarot cards, we’ll keep the coloring a little pale. For now. 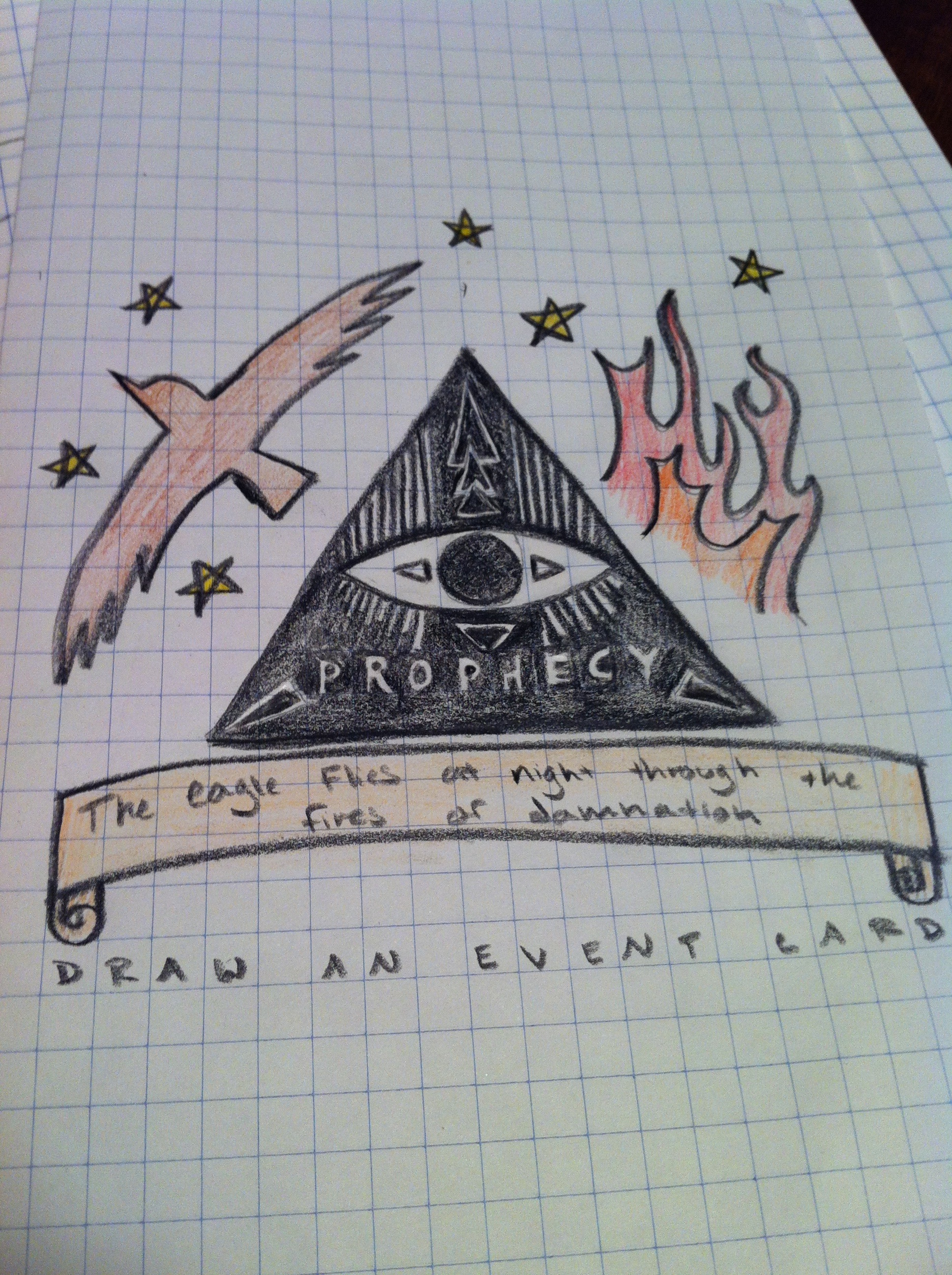 Despite the fact that the colored pencils make it look like a kindergartner colored this in, I think it’s a good start. You’ll have to excuse my lack of proper artist drawing tools; we’ve just moved and our stuff is still in transit. I didn’t want to shell out the big bucks for fancy markers.

I did finally get Illustrator up and working, so here’s a quick idea of what the prophecy symbol might look like done properly: 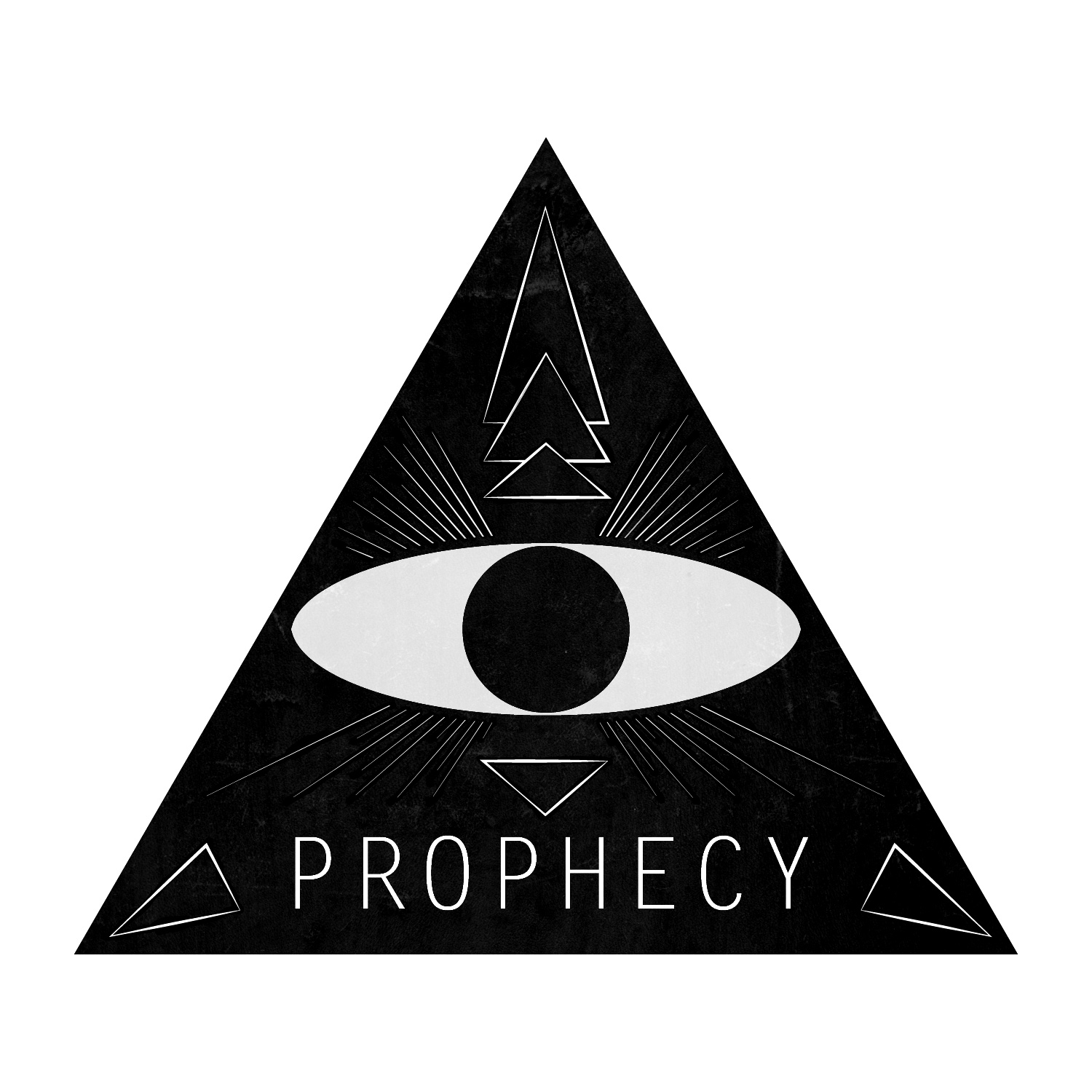 I’d also like to take a moment to mention that we’ve been hash-tagging all over the internets with #cramgames. So if you’re on Twitter or Instagram that’s another way you can keep up with us.

That’s all for now from the art department!

I have been making learning a priority these past few years. And lately I’ve been focusing my efforts on design and business. This project has been great for that and I’m really happy with how I’m growing. I’ve also been rounding out my education by listening to podcasts and reading. I thought I’d talk about a few podcasts and books in case anyone was interested in checking them out.

The Dice Tower – This podcast is about board and card games and industry news. It’s great for learning about new games to try, cool new mechanics, and what the industry is like.

Gamers With Jobs – This one is more about video games, but they talk about the occasional board game. This one is great just to hear people talk about what they liked about a game and what turned them off.

Seth Godin’s Startup School – Seth teaches you how to start projects and bring them to completion. If nothing else, it is extremely motivating.

Tribes by Seth Godin – While we’re talking about Seth Godin I should mention Tribes. A short and sweet book about how to get people interested in what you’re doing.

Getting to Yes by Fisher, Ury, and Patton – This book is primarily about principled negotiation, but I’m finding it useful for communication in general.

Rapid Development by Steve McConnell – I’m a software engineer by trade and this book is tailored to software development, but it has taught me about how to lead and how to run a project better.

The Writer’s Journey by Christopher Vogler – This book teaches you about the structure of a story. I think knowing how to create a good story has a lot of applications, including game design.

The Art of Game Design by Jesse Schell – This is the number one book I would recommend to an aspiring game designer. The book is divided up into lenses that you use to inspect various parts of your game. I still occasionally break out their nifty app that serves as a quick reference for all the lenses in the book.

We said farewell to Cindy and Will a few days ago. That’s the bad news. The good news is that we were able to get in 2 solid 4-player games before their departure. 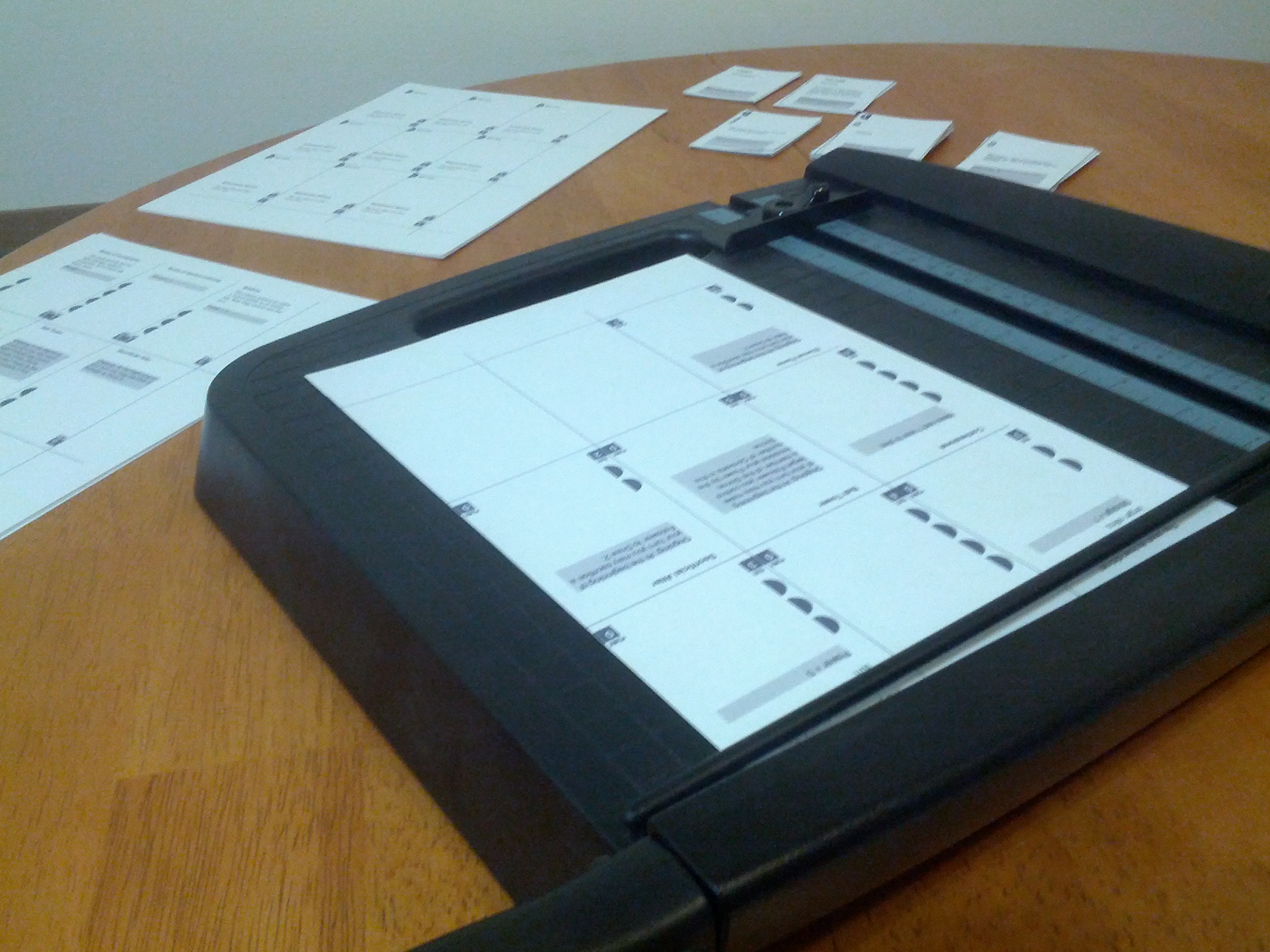 Cutting out the prototype

I had printed out a version of the prototype with the Prophecy changes shortly before Xmas. I tried it out over the holiday and quickly discovered that the Prophecies were coming up too frequently and the reward for playing them was too great. At the time, a player was given 2 Power (2 points toward their final score) and 1 Renown (draw an additional Influence card at the end of their turn) for playing a Prophecy. With the reward being so good, it became the focal of the game, which was not the intent.

So before our farewell playtests, I made some quick changes to reduce the number of Prophecies in the Influence deck and changed the reward for playing a Prophecy to just 1 Renown. I decided to keep the Renown, because I wanted to encourage players to play Prophecies early in the game. I feel that if I had chosen to keep the Power instead, then the player would probably chose not to play them and thus drag out the game. Power has no benefit until the end of the game, so playing a card that only rewards Power merely slows down a player’s early game. 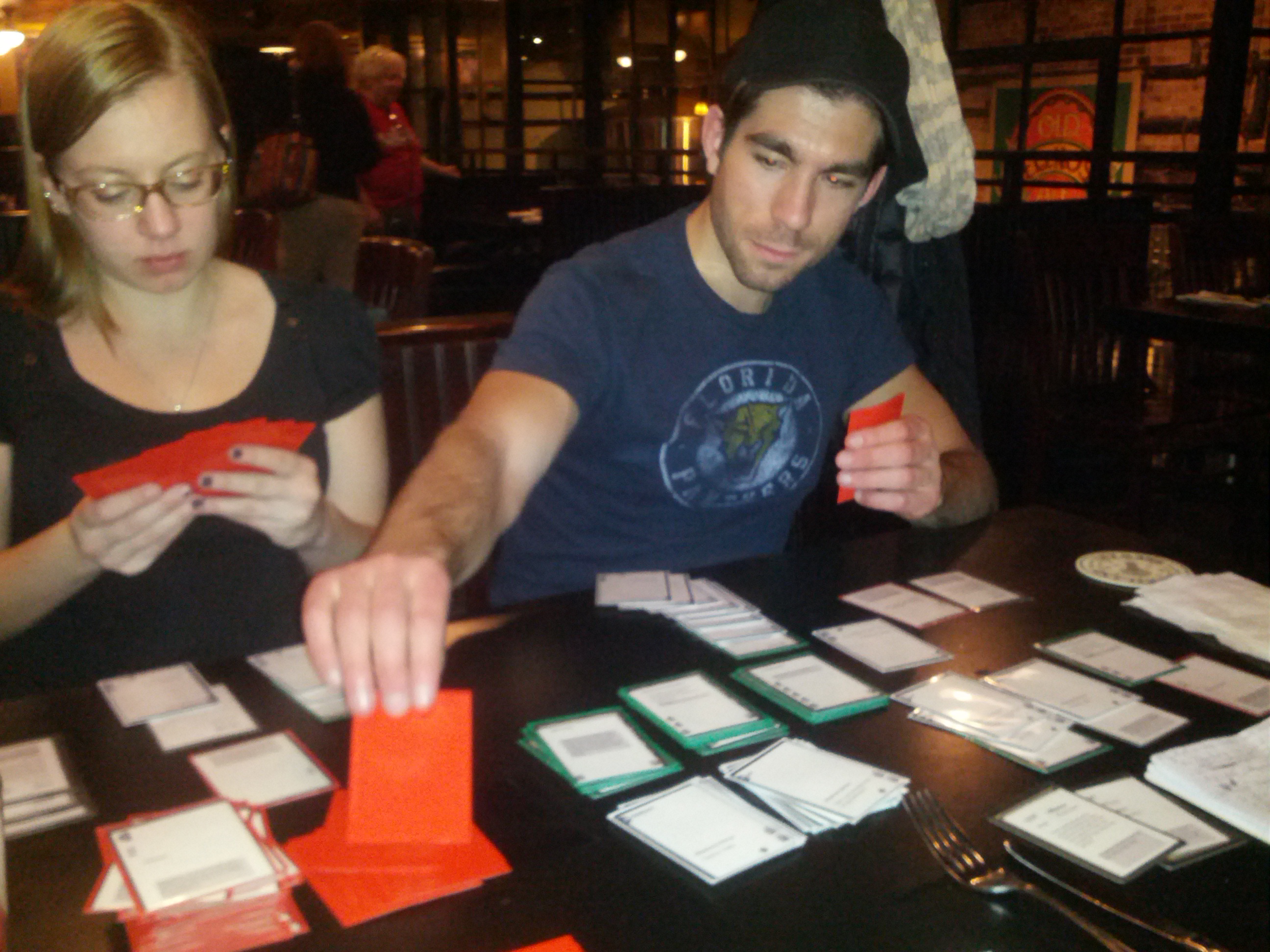 The game in full swing

During the playtests, I was really starting to feel things click. I dare say that I was even having fun. That’s a refreshing feeling after having spent so much time analyzing and tweaking. The Prophecy cards were definitely an improvement over the rounds based system that we had before. This was also the first time that we tried randomizing which Shrines and Followers would be available for purchase. This went as well as we could have hoped. The first and second games that we played were very different in terms of the strategies we were using. Everyone seemed to enjoy discovering what they could do with these new options and combinations. The randomizer is definitely going to pay off in terms of replay value.

I’d say the biggest challenge we are facing now is creating a satisfying ramp up. During the games, it was taking too long to get the engine moving. The first few turns felt really slow, because you couldn’t really buy much yet. And just when your strategy was just starting to kick in, the game would end.

Fixing this is going to come down to tweaking what the game is charging to complete an action. I plan to start with a dramatic reduction of costs across the board, which will likely swing the game to the other extreme. After I get a glimpse of what the game feels like with a speedy ramp up, I can start doing more careful nudging of individual cards.

It’s going to take some time, but we’ll eventually get the game to follow a satisfying progression. 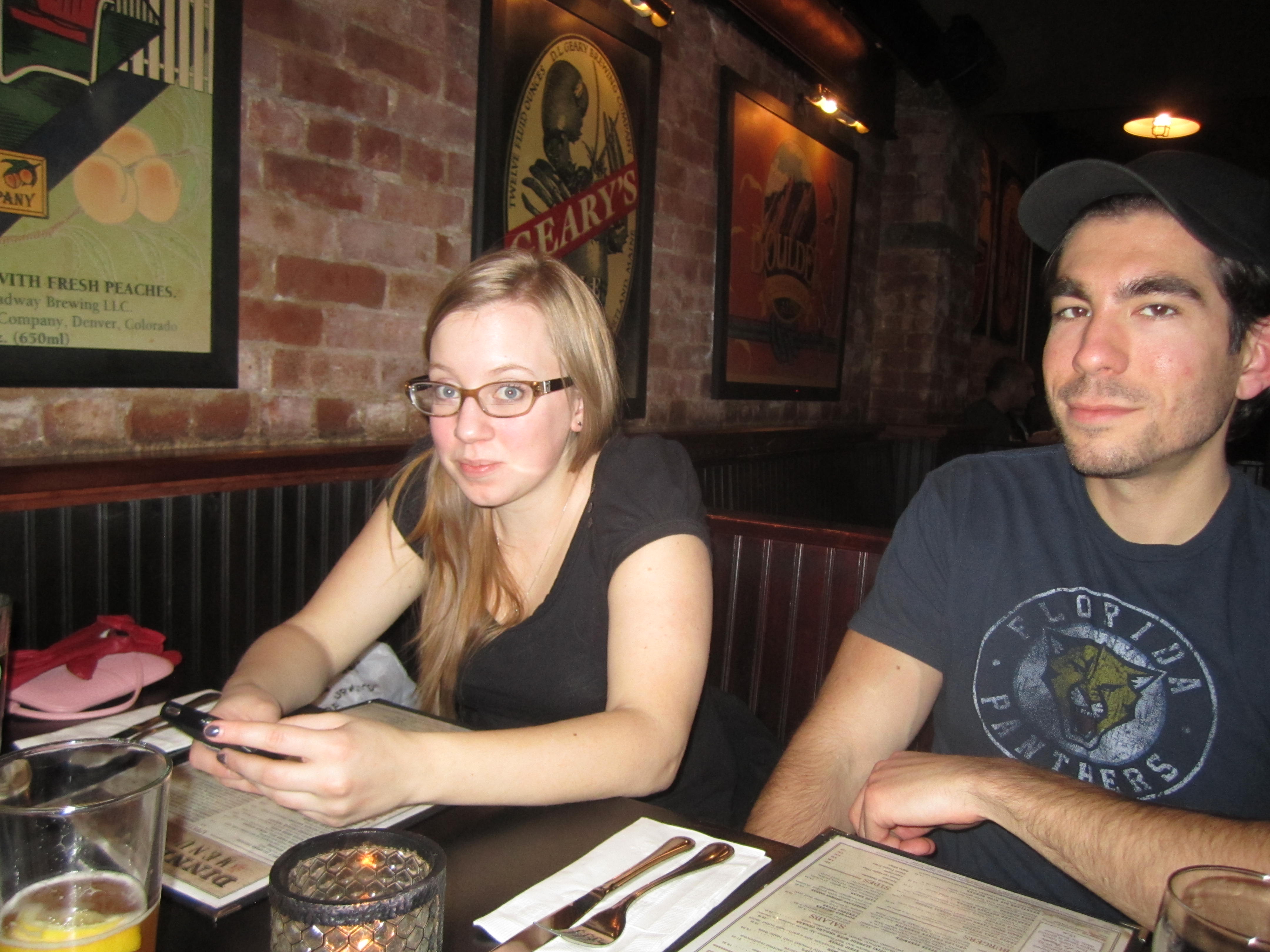 Well, it’s a bit of a sad day for us. Cindy, along with her wonderful boyfriend Will, are moving to the Bay Area. She is still working on the project, of course, so there’s no need to worry about that.we did have one last playtest tonight in a restaurant around Union Square. I’ll let Phil talk a bit more about the new changes in another post. 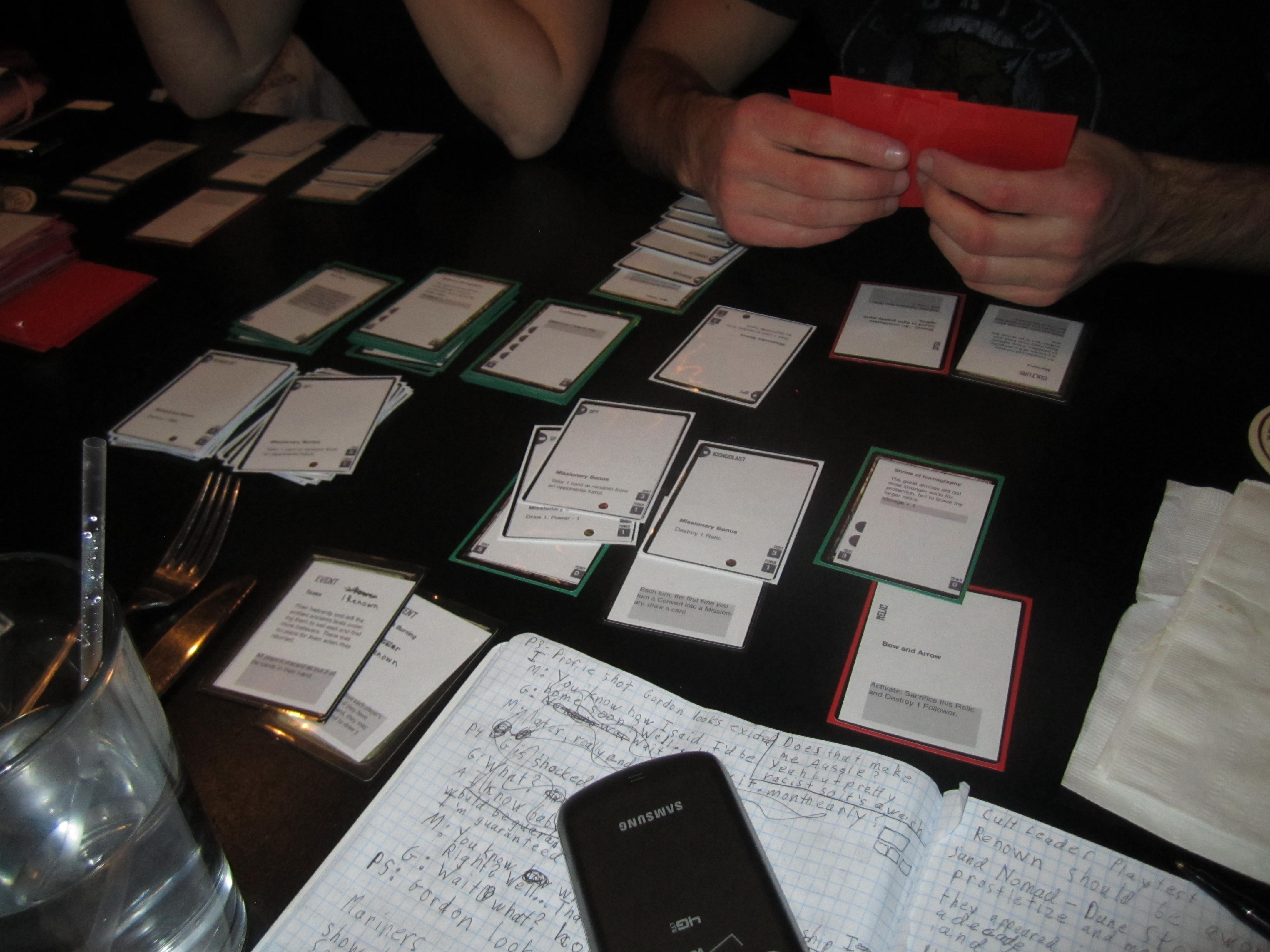 What I started doing during the two games was write down notes of my actions and those of the others to make a small vignette of the match. The first one will involve missionaries. Lots of them. 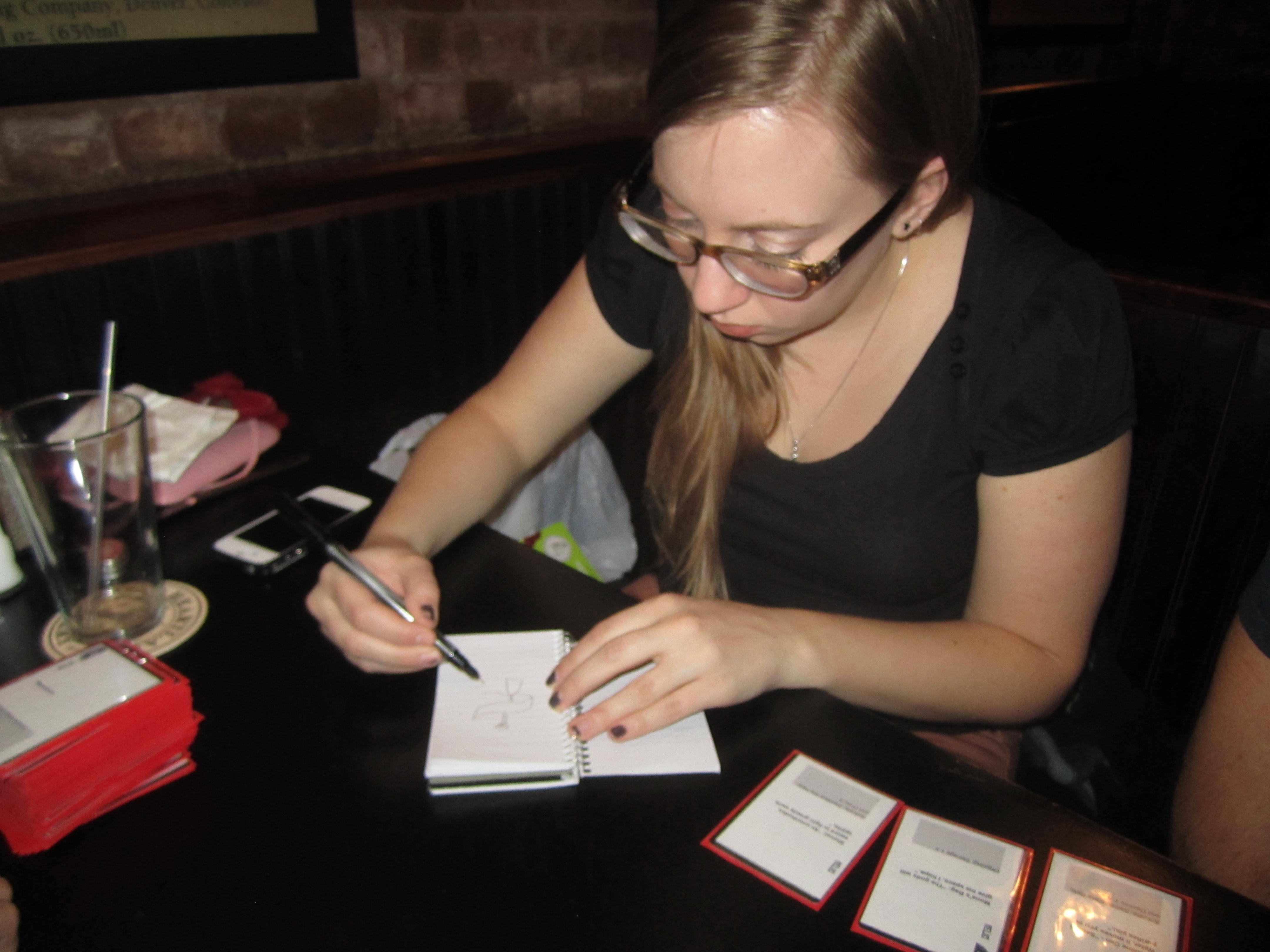 Cindy came up with some great ideas for the card layout. The first involved the relic cards. She thought up of this idea of taking my flavor test and putting them on a scroll/banner that wraps around the actual relic. It’s a pretty brilliant, but it also constrains me to a limited number of words (which is a great challenge). She also wants to incorporate the wrapped scroll idea to the new Prophecy cards.

I will post the little vignette later this week. Until then, spread the Good News.