Our game, on its own right now, is pretty easy to explain. But there’s a difference between explaining it to someone in person, and that person pulling out the rules from the box and hoping they don’t scratch their heads in confusion and putting the game away forever. Our game has some very unique concepts, so our rulebook has to be as well thought out as the game.

The best rulebooks go in-depth and explain every little mechanic about their game. It is chock-full of  images, examples, and understandable language that fill the player’s head instantly. Without it, an intense session that goes wrong won’t have the right information to fix it, or have the stuff to get a game going to begin with.

I was looking at a few rulebooks, some at Phil’s suggestion and some on my own, to get started on how our rulebook should look like. Here are some that were effective for their games.

The strategy territory-building game use a lot of icons that make it easy for the player to remember what is going on. The setup and turn sections are explained plainly and in detail. We’ve played this game before, and it is arguably one of the best rulebooks we’ve seen. After the regular rulebook part is finished, it has all the tiles, agents and lords used in the game, explained and divided by appendices.

The beauty in how this Kickstarter-funded game made its rulebook is simple. First, it’s barely a book – just two print-ready pages. Second, most of it is either written in lists to explain order or short blurbs that keep things clear.

For all intents and purposes, this game can be very complex at times. So, this is more of an example of how the writers did such a good job in creating a rulebook that made it as made it as accessible as possible. Players have a good start on first page from an image of the player area in the setup page. All the sections have strong headings that pop out and make it easy to find the portion you need. 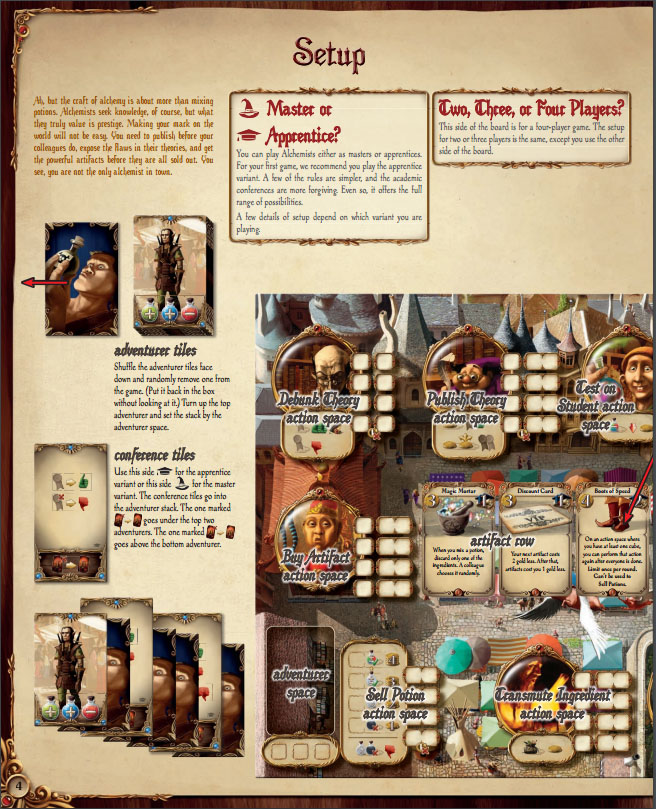 The flavor text throughout is tongue-in-cheek and well placed. Texts are changed in color to get the reader’s attention, whether it be to read about a mechanic of the game, or one of the many examples described throughout the rulebook.

What makes this game’s rulebook stand out from the other is that I has a cool map-generation section. From there, players can use the hex tiles to configurations for different styles and numbers of players.

What Our Rulebook Needs

Our rulebook needs an appeal so that it isn’t just about understanding how the game works. It will need clear visuals of the cards and setup along with clear language about mechanics. It wouldn’t help putting in some flavor to get the theme across, either. As soon as we get this done, we won’t have to worry as much when start blind playtests.

Thanks to those who played Scrapture at the First Exposure Playtest Hall at #GenCon2016 ! There again today 4-8pm. pic.twitter.com/fMgxQSuK5G

Phil, Cindy, and I are still here, I promise you. We’ve been working on the game as best we can. What really helped us came from Phil’s two trips to the table-top gaming con Mecca known as Gen Con. And they have been very important trips to the game’s development.

When Phil took the game to Gen Con 2015, it was very different.  The 2015 version of the game had Influence cards, which players could use to draw cards, gain points, etc.  At that point, Phil considered the game completed. There was some complexity to it, but it had solid mechanics that let you do interesting things once you figured it out.

He presented the game to some designers at the Game Crafter Community Game Night (they’re the ones that print our game). It was there where fellow designer Andrew Voigt – designer of Perspective – delivered the strongest criticism about the game it had ever received.

“If I went over to a friends house and they asked me to play this game, and after we were done they asked “do you want to play again?”, I would say “no thank you”.

Phil said it hit him so hard that he still remembers it.

Andrew explained it further.There was too much decision space in the game. All the choices and different directions that find the best way to win were mentally draining. The game was overloaded with effects, most of it coming from the Influence cards.

After the criticism, the options were to either accept the game as is or do some major fixing. That very night at the hotel Phil started working (with Emma‘s help) on making the game a simpler one. The focus was finding what were the key interactions of the game – and cutting out the ones that weren’t.

After feedback with the different Gen Con crowd, this was how the game changed:

The game now now has a much more simple core gameplay loop Now that the heart of the game centers on three types of cards instead of five, it’s more accessible.

Two more great groups of Scrapture playtests at #GenCon2016. Thanks for all the awesome feedback! pic.twitter.com/cqdlDcNblw

What Happened One Year Later?

This year at Gen Con 2016 Phil had playtests with this leaner version of our game, and the reports are that it went well. Two of the groups managed to get through two full games. One three-player group got it done under 30 minutes, which is awesome.
There was still room for improvement, of course. Here’s a few of the major points of feedback that Phil collected:

The most important aspect of this feedback is that it’s coming from regular players. The help of other designers has been essential to getting the game this far. However, game designers are always looking to give you feedback and they aren’t always interested in the kind of game you’re making. This event was nice because the people who played chose to play it. In the end, you can’t beat the satisfaction of watching people enjoy your game and have fun.