Born from a desire to get some more playtesters for the game and to network with other game designers, I started a Meetup group: http://www.meetup.com/NYC-Tabletop-Game-Designers/. The idea is that designers can bring their prototypes, help test other people’s games, and get theirs tested as well. And even if you aren’t working on anything currently, you can still go to meet other designers and maybe get inspired. 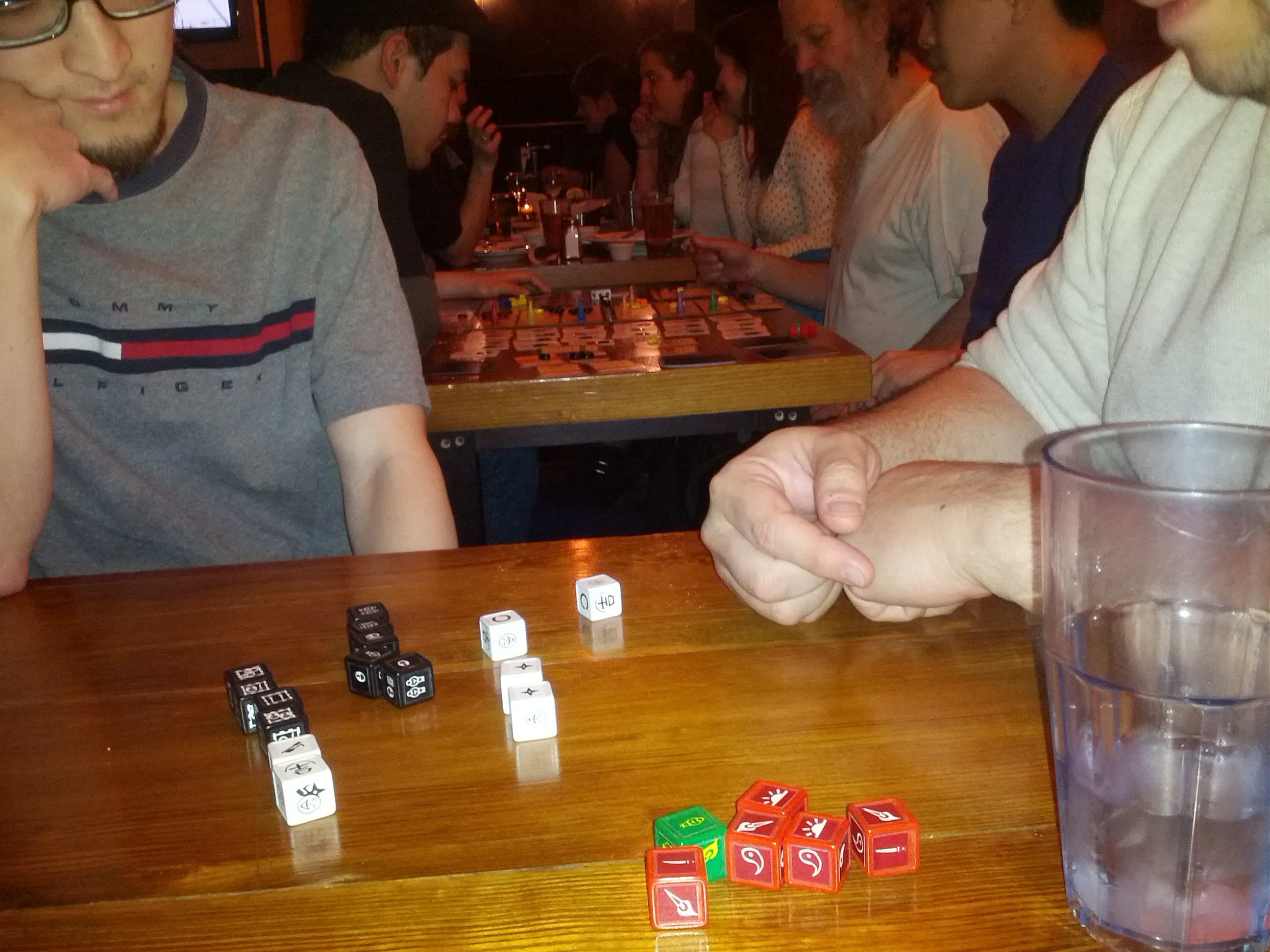 We had our first session on Tuesday (2/19/13). There were 4 prototypes to test, including our own, in various states of polish. The 2 games that I played were really fun and I’m looking forward to playing the other. The people that came were great, too. There was a lot of great feedback and ideas flying around. 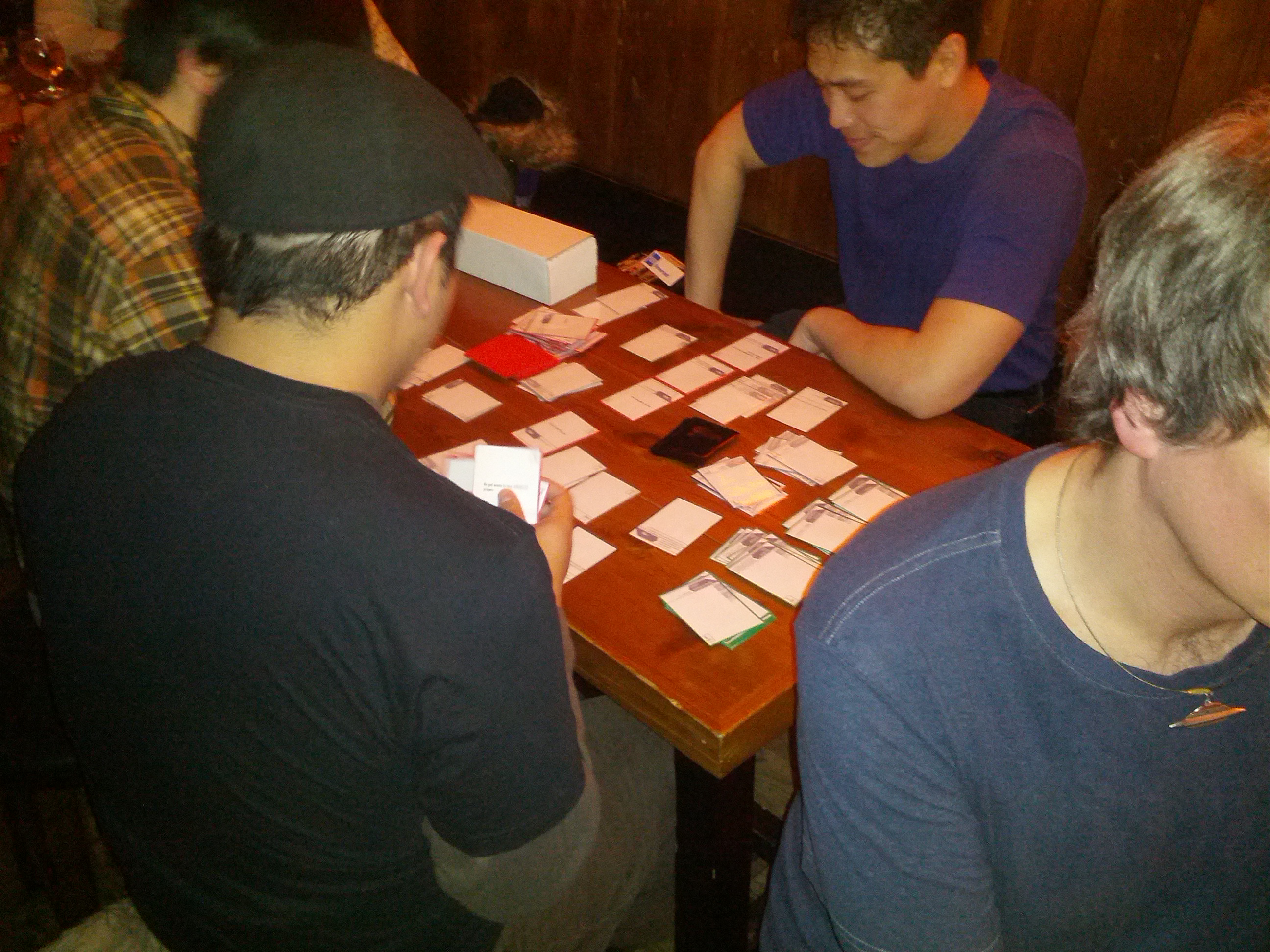 Jesus ran our game and said that it was well received. The players seemed engaged and caught on quickly. They also gave us some really great feedback.

We’ve always struggled to keep the game going at a good pace and keeping turn length down. There have been some mechanics changes to help with that, such as having players draw their cards at the end of their turn. Our playtesters suggested that we could use the card aesthetics to help speed up the player’s analysis of the cards. As a result of that feedback, we are going to try putting icons on the Influence cards to indicate what “category” the card is in. Example categories could be attack, defense, or economy. This will help players quickly understand the purpose of a card and if they want to use it during their next turn.

The playtesters also suggested that the discard mechanic was counterproductive to keeping turns quick. Players may have spent time figuring out how their turn was going to go, but when they are forced to discard they will likely need to re-plan. On top of being frustrating, this ends up slowing down the game. We could also get into the even worse situation, were as a result of having to discard, a player has no options during their turn. Our playtesters suggested a possible solution to help deal with this problem. Instead of having a player discard a card, they receive a mark. This mark indicates that they will draw less cards at the end of their next turn, rather than discard immediately. The benefit here is that the victim is not forced to re-plan. The mark also sets expectations. Rather than planning a huge turn only to have it shut down before they could do anything, the player has fair warning about how their next turn is going to go.

Overall I thought the meetup was very valuable and fun. I’m really grateful for the amazing feedback we received. I’m definitely looking forward to the next one.

The death came in two parts. The first was the physical one that came in the form of my master’s slow decline into the other world. It was sad, in a profound way to him – his family’s whole existence was devoted to protecting an inner light, one in the…what’s that word he used? Ah, yes – “mind”. In his rare moments of pride he would proclaim that it was that invisible object known as the mind that resided in the head of his family and in that of all people. None of us could ever find a visible example of this object – and trust me, there were some who risked opening their heads to do so. It was the inner mind of my master that allowed his control the of the glowing eyes and veins of the snake. I was taught how to control the heart of the snake, so in a sense perhaps I too have a “mind”.

The stories master would tell the rest of the clan were wondrous at first. He told of the World Before, when light filled the dead glass monoliths and the infinite blue canopy above the world housed silver birds the size of houses. A time where all of those with a mind could talk over long distances, much further than the tunnels we lived in. Of how we had the power to fight the fearsome ravages that plague our bodies.

Then he would tell us about how we as a mighty race still did not have the foresight to see the cliff, and how we did not have enough knowledge to understand the depth of our civilization’s fall. The Darkness, he would call it, a disappearance of light, in all forms, mind, body, and spirit.

“Disorder covered all,” the master would say in hushed and defeated tones. “Entropy of the mind, of the body…all of us almost fell into the Darkness.” He then said that we, the Clan of the Metal Snake, were descendants of those who left the chaos. Our ancestors braved that first descent into the shadows of the tunnels in order to survive the Darkness above.

“We ran because we thought,” was the first line of the tale. “We represented not just a threat – a false one, at that – but as an excuse, to inflict the pain so many had felt when the lights went out.”

He would never tell us the true cause of the Darkness, just as his father could not nor could his grandfather  or the rest of his lineage. His answer was always the same: “I am still investigating it.”  Lamentably, his  search could not stop his coughs, growing stronger every day, or his inability to hold  the controls of the snake. His reliance on my strength increased with his age. That is how the second death started.

I mentioned that I went to a Catholic school in my first post. Well, it appears that my alma mater has provided me with some new inspiration: the school made a no-cursing pledge – for girls only.

This is not surprising to me. There was a previous moment of cognitive and departmental dissonance at that school when the theater group chose Cabaret for the spring musical one year. The church boycotted  the show. You can’t call it taking from Peter to give to Paul anymore – it’s more like slamming one hand with a hammer held by the other. It’s a worthless endeavor that harms both, and an incredibly stupid decision that marred my thoughts on the school. Up until that time the rules were, at least to me, just and lenient. I had my own “sins” to account for – ironically it’s my propensity for swearing that almost always got me in trouble. But the sexism inherent in this new edict is very disappointing, to put it lightly.

Now, as to why I’m putting this in the Cram Games blog and not in my personal one. As I was semi-frothing from the mouth I realized something – why not use it to fuel new card ideas? The first that came to mind was simple – the idea of sacrificing your voice as a way to show reverence to a deity. There are good uses for it of course – extending awareness, purifying oneself from distractions. enhancing meditation, etc. At the moment I’m trying to develop the concept as flavor for an existing Idea card, but I believe the potential for a whole new cards is a stronger one. Imagine the card affecting the followers a player has, when it makes a trade-off from one ability to upgrade/power up another.

It’s an interesting concept that I’m toying around with in my head. For the time being, I’m just going to think up of more ideas related to silence. It’d be a more productive use of my time than sending the school an expletive-laden letter.

I’ve still been struggling a lot with the player politics in our game. I feel that I’m able to articulate the problem a lot better then I was a month ago, so I thought I’d share some of my musings.

The main culprit is called targeted interaction. This is when a player can select who they want to interact with, either positively or negatively. In games like ours, where its very easy to tell who’s winning, players will often choose to gang up on the leader when they have the opportunity.

The obvious drawback to this is that players are punished for taking the lead, which can make experienced players hang back to avoid getting picked on. This is generally not a strategy we want to encourage.

Games like this can also tend to be a roller-coaster, where being in the lead at one point of the game means nothing. Players take the lead and are picked on in turn and only the end of the game matters. Ideally, we would want the actions the players make to be meaningful throughout the game.

There are some pros to this type of gameplay that I would be hesitant to do away with. Firstly, targeted interaction is thematic for our game. It wouldn’t feel right if you couldn’t directly attack someone.

Considering all this, I believe that the best course of action would be to try to blunt the impact of picking on the leader while still keeping the thematic feel and catch up features. I’ve decided to try adding defensive cards to that effect.

If we had high cost defensive cards, wealthy players could use them to help cement their lead. Having this option would make players less wary about taking an early lead. The leader would still get picked on, but the impact would be reduced making the game less swingy.

The bonus to this is that these defensive abilities act as a catch-up feature, since only the leaders really need to spend money on it. Since losing players are freed from this burden, they can put their resources toward catching up.

Adding these defensive options will hopefully help a player convert an early lead into a victory, while making the game much closer for the other players. I’m not positive that this course of action will have the right impact, but I’m looking forward to finding out.