It’s been a while since we’ve updated you on our progress, but we’ve been working hard. Most of the mechanics work has been focused on streamlining the game and making it more accessible to new players. I wanted to give you all an update on the things we’ve been doing to that effect.

We used to have a concept called “Storage”, which determined how many Relic cards you could have in play. Players started with a default storage of 1 and could get more by playing or buying certain cards. Storage was a value that would frequently change, which made it tough for players to keep track of and make sure they had enough storage for all their Relics. We wanted to get rid of this confusing concept while retaining the limiting factor on the Relics. Our current solution is to say that each Shrine can hold 1 Relic. This is a more natural progression and is very easy to visualize. It has the added bonus of increasing the value of Shrines and makes more sense thematically.

Previously, the mechanics wording on Influence cards were very flavorful. I was using a lot of keywords like “Discredit” and “Sacrifice”. To justify using these words, the rules had a glossary that players could use to look up their meanings. With the help of our playtesters, I came to realize how silly this was. By using direct and unambiguous language we make the game easier to learn and teach. Now instead of telling a player to “Sacrifice a Follower”, I tell them to “Remove a Follower you control from play”. It’s not very flowery and it’s much wordier, but a player can pick up this card and know what it does without having to cross reference the rules. We can just let the flavor text handle all the thematics.

One thing we are consistently working towards is reducing the amount of information we bombard the player with. We moved in the right direction with the Tribute changes, but we are now taking it a step further. Now whenever you draw a card, including at the end of your turn, you draw it face down. Face down cards can be spent, just like cards in your hand. At the end of your turn you can put these face down cards into your hand, up to a maximum of 6 cards in hand. This means that a player will only have to read, understand, and plan based on a maximum of 6 cards at a time. Since the players can still spend these face down cards, it doesn’t impact our existing economy. This also creates some consistency in how players draw cards, instead of having them sometimes draw face down and sometimes draw to their hand.

Lastly is a change that I will be trying out at our next playtest, so it may not stick. When we first introduced the idea of Prophecies I was very pleased with them. However, I’ve become less taken with them as time has gone on. The purpose of Prophecies was to make the game end dynamically so that players wouldn’t get an advantage based on turn order. While they perform this function well, Prophecies add quite a few rules to the game. I’ve also seen an unpleasant phenomenon where a player will need to completely calculate the current score of each player before they can feel confident playing the Prophecy that will end the game. In light of these issues I plan to do away with Prophecies and instead have Event cards trigger when a purchase pile is emptied or the Influence deck runs out and is reshuffled.

Combined, these modifications significantly reduce the length of my rules explanation. And while I’m not sure we will end up using all of these changes, I think we’re heading in the right direction. I’m looking forward to further playtests.

At the beginning of November, we were ready to print another prototype. The rules and most of the cards had been rewritten. Things were coming together nicely and I was anxious to test out the changes. Cindy had also put some work into the card layouts, which made the game much more pleasant to look at and the rules easier to grasp.

I went through the extra effort to sleeve all the cards this time. Its pretty easy to just take a sleeved card and put a paper insert in front of it, but it makes a big difference when you actually play the game. 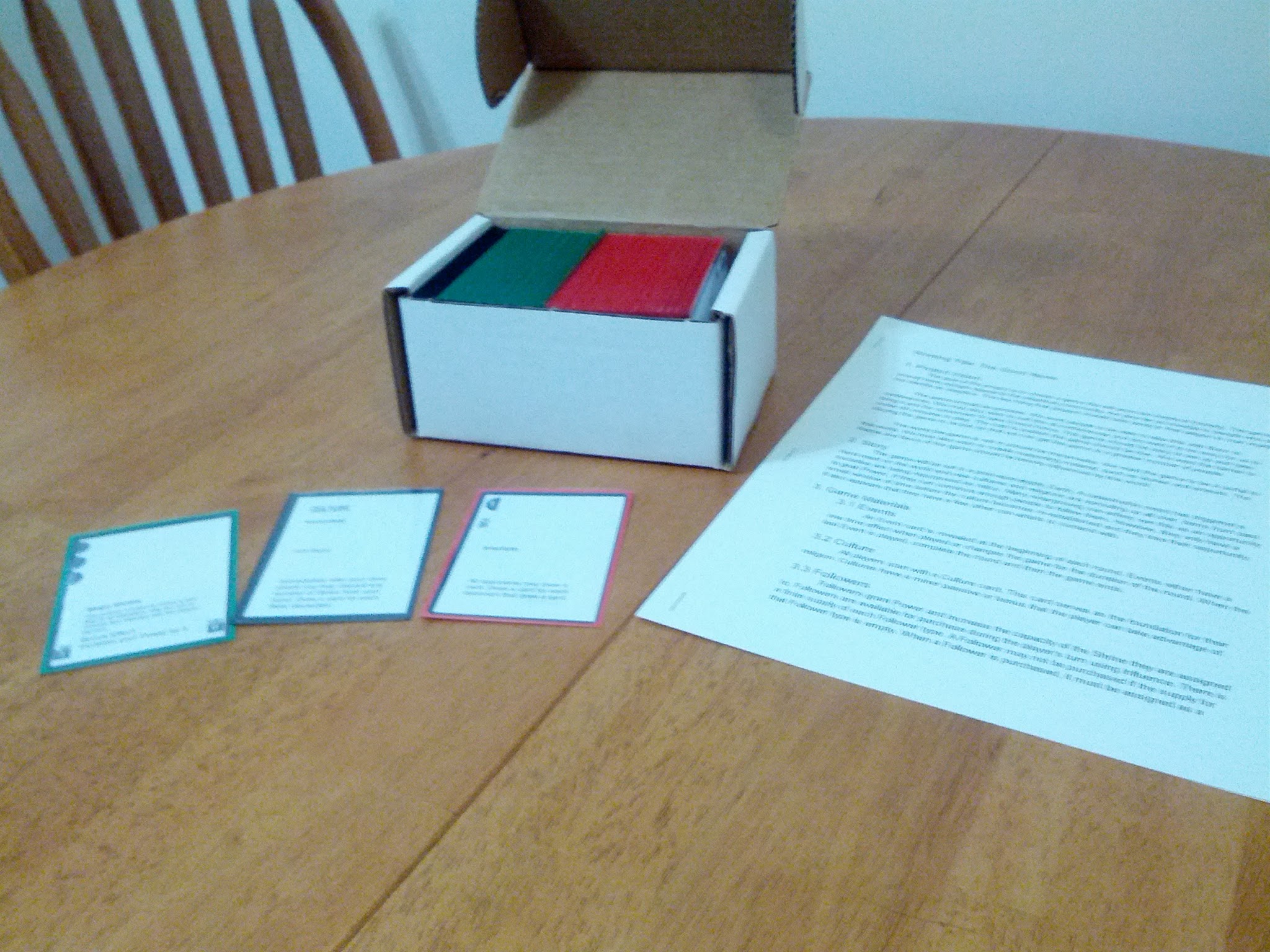 The cards are sturdier, easier to handle, and it makes the prototype feel more real. I’m a big believer in using higher quality materials to do your work. I think it gives what you’re doing a sense of higher importance. It helps keep me motivated and it reminds me that I really am a game designer.

We got a lot of great critiques out of our playtests, despite my poor performance at eliciting feedback. It can be really tough not to get defensive, but it is absolutely essential to focus on asking questions and listening if you hope to get any useful information out of your playtests. Never waste time justifying a design decision, even if you feel the feedback you are being given is wrong. If you go down that road, you run the risk of making your playtesters feel that their feedback is not welcome. Your game will suffer for it. This is a skill I am intent on getting better at.

The game obviously had its problems, but I think the core of the game worked well. It had strategic and puzzley aspects that were really satisfying. If we want these elements to shine, we need to cut away or rework the parts that are holding the game back.

The game being puzzley has its upsides and downsides. The main downside is known as “analysis paralysis”. This is where the player has so many options that they become overwhelmed. While it can be fun for the player to figure out what the best move is, its not terribly exciting for the other players to sit and watch them do this. There are a few ways to deal with this. One is to give players something to do when its not their turn, so the waiting is not so bad. You can add some form of trading or defensive actions, so that players remain engaged while they wait for their turn to come around. You can also make player’s turns shorter by splitting up the phases of a turn or having some phases be shared amongst all players.

What we ended up doing, was reduce the amount of new information a player had to process when it became their turn. Players now draw their cards at the end of their turn, rather than at the beginning. This way, the players can figure out their possible moves during the other player’s turns. So far this has been helpful, but I think there is even more we can do to speed up the game.

One thing I had begun to worry about was that players would settle into a strategy that worked for them and never deviate. This would grow stale very quickly, because the player would no longer be challenged by unanticipated scenarios. The plan to solve this is to add randomness to the starting setup. This way players would have to readjust their strategy for each new game. We added several new Shrines and Followers to the game. Now, when the game is set up, a subset of the Followers and Shrines are randomly selected to play with for that game. We think this will give the game longevity and creates an opportunity for future expansions.

The number one problem we had was wording. The player’s expectations about what a card did, was not always lining up with my intentions. Sometimes this was because of a situation arising that I had not planned for, but most often the culprit was ambiguous wording. The most frustrating was the inconsistent use of the word “discard” to refer to cards being removed from your hand and/or from play. This prompted yet another rewrite of all the cards to use a keyword system. I tried to identify most of the unique mechanics and give them a name. For example, “discard” now only refers to removing cards from your hand. “Destroy” is now used when you are removing an opponent’s card from play. And “sacrifice” is for when you are removing your own card from play. We are still tweaking the wording and trying to bring the keywords more in line with the theme. Overall, I think it’s helping.

The last thing I want to talk about from these tests is a problem I’m referring to as the King-Maker Problem. However, I believe our journey toward addressing that issue merits its own post. So you can look forward to that in the next few days.